In this blog post, Denise Llewellyn MBE FRCN talks about her experience as an RCN Foundation Trustee as well as the Chair of the Foundation Wales Committee. The RCN Foundation is currently recruiting for a Scotland-based Trustee. If you are interested in the role, you can find further information here.

Following my retirement in October 2016 after working 38 years in the National Health Service, I still wanted to be involved in the nursing profession. I had significant experience as an executive and senior manager at a strategic and operational level within the NHS in Wales and England.

My core belief and values are based on integrity, honesty, and equality for all people. Throughout my career I had strived passionately to uphold these principles and felt that these skills could be used to contribute to the inspiring work of the RCN Foundation. In my mind, the Foundation emulated where and when support could be given to nurses and the nursing team to truly make a difference: whether that be that grants to improve education, projects to improve nursing practice, or assistance from the Lamplight Service to nurses who need support either pastorally or financially when they fall on hard times or during illness.

As a Fellow of the Royal College of Nursing (FRCN) I had been aware of the excellent work that the RCN Foundation was undertaking to support and enable the nursing team across the UK in improving practise and the health and wellbeing of the public.

I joined the RCN Foundation in 2016.  Coming from Wales, it became clear that the excellent work and support provided by the RCN Foundation had not quite reached Wales, but there were plans to expand further into the four UK countries. Scotland already had a committee, and so in January 2017 the Trustees agreed that a Wales Committee should be formed. I agreed to set that up and become the Chair.

Identifying enthusiastic and influential committee members was the first challenge. The membership needed to include individuals from North to South and East to West Wales to achieve the greatest impact promoting the Foundation in Wales. Membership now includes:  a Chair of a Health Board, an Educationalist, Directors of Nursing, and a Senior Nurse. We looked at quality rather than quantity and the Committee at present has 6 members.

Work plans were developed by the Committee and agreed with RCN Foundation staff, who were instrumental in assisting the setup of the Committee. They ensured that its Governance role was always at the forefront and that all the Committee plans filtered into the key strategies and objectives set by the RCN Foundation Board. As Chair, I also had meetings with the Chief Nursing Officer (CNO) who has been very supportive to the Wales Committee in promoting its work.

Since the creation of the Welsh Committee, the Foundation’s presence in Wales has increased. The RCN UK Library Annual Lecture in 2018 was hosted by the RCN Foundation in Cardiff and given by the Future Generations Welsh Commissioner.

Over the last 2 years the RCN Foundation has funded two key projects in Wales. One on Loneliness, Isolation and Intergenerational work in care homes, which was also shared at the Care Homes Conference in September, as well as a research project involving Cardiff University on professional judgement in nurse staffing systems in England & Wales. The Committee feel they had a part to play in bringing these grants to Wales.

With regards to successful applications for grants from Wales, this has increased from 5% in 2016 to 9% in 2017. A small but important rise! Members of the Welsh Board are all engaged with the Foundation, bringing its vital message of supporting nursing and improving care to Wales.

In September 2019 the Wales Committee organised a 2-4K walk across Cardiff Barrage Opened by the CNO. Despite the inclement weather the process certainly promoted the work of the Foundation and over 44 people proudly wore RCN Foundation t-shirts. The Committee partnered with RCN Wales, 203 Field Hospital & Public Health Wales on the day. We are currently planning further collaboration including contributing this year to the WHO Year of the Nurse & Midwife activities – of course with a specific focus on Wales! 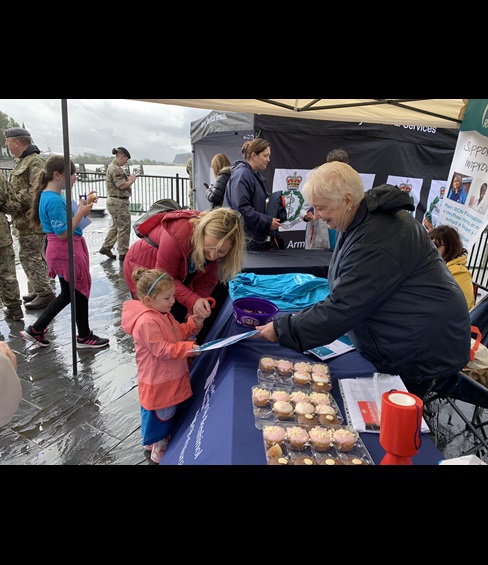 'Walking with nurses, for nurses' fundraising walk organised by the Wales Committee

If you are interested in the RCN Foundation’s current vacancy for a Scotland-based Trustee, please click here for further information on how to apply.